<h4>t is common knowledge that a person should cover their mouth when they sneeze in order to reduce the spread of germs. Now, a new study highlights the importance of this hygiene etiquette, after shedding further light on how sneeze droplets disperse and spread in the air.</h4> 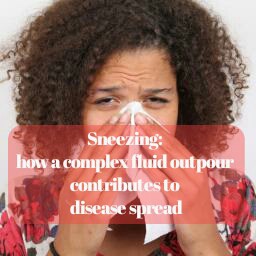 While popular notion holds that sneezing disperses a uniform spray of fluid, the new research – published in the journal Experiments in Fluids – suggests this is not the case.

Instead, researchers found that when a person sneezes, a “balloon” of fluid emerges from the mouth. This balloon then disbands in long threads before dispersing as a spray of droplets. The team compares the process to “paint that is flung through the air.”

Furthermore, the study revealed that the more elastic a person’s saliva, the farther the fluid travels through sneezing.

Study coauthor Lydia Bourouiba, head of the Fluid Dynamics of Disease Transmission Laboratory at the Massachusetts Institute of Technology (MIT), and colleagues say their findings may help identify “super spreaders” – people who are most likely to spread illness through sneezing.

Findings shed light on variability of disease spread in humans
To reach their findings, the team used two high-speed monochrome cameras to record more than 100 sneezes – induced by nose tickling – of three healthy participants who were placed against a black backdrop.

A single sneeze can produce up to 40,000 fluid droplets
A sneeze can travel up to 20 mph
Allergies, colds and flu are common sneeze triggers.
How to treat a cold

The high-speed imaging allowed researchers to capture around 200 milliseconds of each participant’s sneezes and analyze them frame by frame.

From their analysis, the researchers found that as soon as fluid leaves a person’s mouth through sneezing, it combines with the simultaneously exhaled air to form a balloon.

As this balloon moves through the air, it breaks into thin threads that divide into sprays of different-sized droplets. These droplets either stay in the air or fall to the ground.

Additionally, the team found that for subjects whose sneezes contained more elastic saliva, their exhaled fluid stayed in thin threads for longer, meaning it traveled farther before breaking into droplets.

The team says the findings came as a surprise. “We expected to see droplets coming out fully formed from the respiratory tract,” says Bourouiba. “It turns out that’s not the case at all. And this gives us a good baseline to expand our mechanistic understanding of violent expirations.”

“This line of work is opening the way for us to gain insights into the variability between human subjects,” she adds, “and to determine to what extent the breakup process of mucosalivary fluid gives us information on the inner physiology of the host.”

Developing disease prevention models through contamination data
The findings build on those of another study from the MIT team, which was reported by Medical News Today in 2014. In that study, the researchers found that droplets from coughs and sneezes travel around 200 times farther than previously thought.

The team hopes that their previous research combined with their new study will help identify individuals who are most likely to spread illness, as well as aid the development of disease prevention models.

“The way transmission routes are being quantified even today still rely on the traditional way that has prevailed for hundreds of years, which is talking to people to survey who they talked to, where did they go, et cetera.

There are clear limits to the accuracy of the data acquired via this process, and we are trying to have more precise measures of contamination and ranges to root disease control and prevention strategies in the physical sciences.”

Bourouiba is in the process of setting up a new laboratory at MIT, which will include a climate-controlled chamber allowing her and her colleagues to better visualize coughs, sneezes and other factors that contribute to the spread of disease.

“One of the important goals I have for the lab is to tackle cold andinfluenza,” says Bourouiba. “Sometimes the symptoms are difficult to distinguish. In the coming year, at different cold and influenza seasons, we will be recruiting human subjects whom we can work with to see them in infection and in health.”

Last November, MNT reported on a study suggesting we may be the best predictors of our own health, after finding that people who self-rated poorer heath were more likely to develop a common cold than those who self-reported better health.