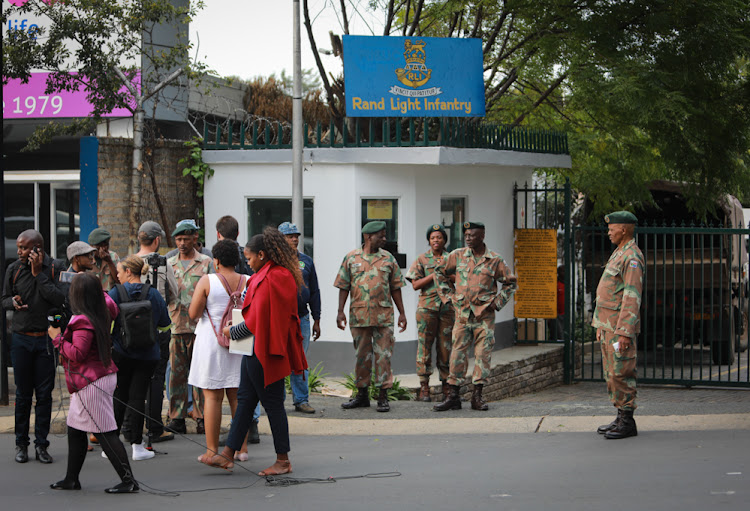 Troops will help the police implement the lockdown.
Image: Sebabatso Mosamo
The government has been on high alert since the first case of coronavirus three weeks ago. As more citizens test positive, with confirmed cases now at 709, more has been done to prevent further spread of the deadly virus.

Announcing a 38-year-old man from KwaZulu-Natal as the first coronavirus case in SA, health minister Dr Zweli Mkhize said the government had identified a quarantine centre which would house patients diagnosed in the province.

The man had travelled to Italy with 10 other South Africans. Shortly after the diagnosis, the health ministry started contact tracing people who had been in direct contact with the man in an effort to contain the virus.The 122 South Africans formerly based in Wuhan, China, were evacuated and are undergoing quarantine at a Limpopo resort. They all tested negative for the virus, but are under quarantine as a precautionary measure.

Police and the military were deployed to ensure safety at the resort.

Mkhize said the evacuation was the government’s response to requests made by the group to be repatriated from Wuhan. Coronavirus a national disaster, school closures and travel bans

President Ramaphosa announced last week measures taken by government to contain the coronavirus. They included travel bans, closures of many of SA’s ports of entry, such as airports, some ports and border posts.

Schools were also closed in line with the ban on gatherings of people in groups of 100 or more.

Citizens were also discouraged from travelling to high risk countries including the US, China and South Korea.Lockdown

On Monday, president Cyril Ramaphosa announced that SA would be under lockdown from midnight on Thursday until midnight on April 16. This means businesses would close and the movement of citizens be limited.

Public servants, including health-care workers, police and members of the military were exempt from the lockdown as they are central in the fight against coronavirus.

Police and the military will be deployed to areas identified as high risk to ensure correct implementation of lockdown rules, said Safety at correctional services

Justice minister Ronald Lamola on Wednesday said offenders and officials in SA’s prisons would be safe as control measures were being taken by government. Lamola was responding to concerns raised by the Public Servants Association of SA (PSA) about the overcrowded prisons.

It said should the offenders or officials get infected due to a lack of protective gear, the country’s prison system would collapse.

“As the country has been placed on lockdown, correctional facilities will function, but certain activities will be suspended and we will continue not accepting visits. Correctional officials render an essential service and they will therefore be expected to be at work,” Lamola said.